The Plant Biotechnology for Health and Sustainability Program hosted their annual symposium last week and included speakers from a diverse pool of MSU current employees and alumni.  There were many interesting talks, including Robin Buell’s recap of the National Academy of Science’s most recent revaluation of GMO’s (#GECropStudy) and John Olrogghe’s demonstration of how single gene research can translate into an applied setting to increase seed oil yield.  Some researchers pushed innovation within the lab to explore new questions, such as Doug Allen’s work integrating isotope labeling and flux analysis with computational modeling.  Ashley Shade detailed her synthetic microbial communities system, a novel method for revealing the roles of individual microbe species within a community and understanding how species composition can affect community health.

I encourage you to check out the work by the researchers who participated in the symposium, but my post is not going to cover the research content.  I want to share my thoughts that were initiated by the Friday morning panels and persisted through the next week. 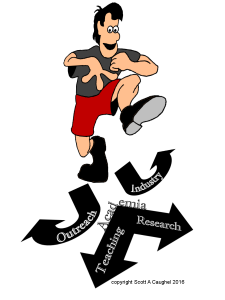 Outside of the research presentations, much of the focus was on available opportunities outside of academic research, including industry, politics, and outreach.  The symposium was serendipitously timed as it was quickly followed by a visit from Joseph Byrum (R&D Director at Syngenta) and the most recent issue of Nature Magazine, which focuses on “The Plight of the Young Scientist.”

There are a few comments that have stuck with me over the week.  Sheril Kirshenbaum’s talk on her career history is the first.  She started graduate school working on sea cucumber at the University of Maine until she applied for and won an AAAS Science and Technology Policy Fellowship.  The fellowship provided her the opportunity to work with politicians in Florida.  Specifically, she was the liaison between researchers and politicians.  She and a few other political aids would have 15 minute meetings with researchers to discuss work that was politically relevant.  Having a background in science, she was excited about most of the research being presented, but could see her fellow aids’ eyes glazing over as researchers began to discuss details that the aids didn’t have the background for.  She claimed that the worst offenders were those that printed out a PowerPoint for the discussion because the PowerPoints reflected the lack of awareness that researchers brought to the table.  After a day’s worth of meetings, the aids would put together a small, less than one page summary of ideas that were discussed, often only highlighting relevant research in a couple of lines or bullet points.

The second talk I found particularly engaging was Ailing Zhou’s dialogue describing her experience moving into industry from academia.  The most interesting points in her talk were focused around researcher’s behavior.  She plainly stated that she failed her first interview because she did not have good responses to the behavioral questions.  These questions included those such as “What role do you see yourself playing in a team” and scenarios such as “Your team leader wants to cut a project, but you are still interested in pursuing it. How would you handle this situation?”  She specifically practiced and prepared these responses with her husband, who had been working in industry for a couple of years, and was able to get a position during her second interview.  This highlights that, compared to working on solo projects for your graduate studies, most of the work you do in industry is team based, and your role in that team may change as the project requires different backgrounds.  An academic career can persist on a single project.  On the other hand, industry projects change constantly and you may change projects several times within a 1- or 2-year position.  For these reasons, flexibility is a very useful skill.

The Science Outreach in Developing Countries focused on unique research at MSU with partnerships in Africa.  I was excited to learn from Jamie Monson, the Director for African Studies, that MSU’s Alliance for African Partnership (AAP) provides a breadth of resources to promote international collaborations.  Graduate students can apply for travel grants and there are faculty proposal opportunities.  They even provide help learning languages of your country of interest!  If you are interested in broadening your research program to include African countries, be sure to check in frequently with the AAP as they are currently building a “collaboration portal,” a database in which all known researchers, across both MSU and African universities, will be able to peruse and identify potential collaborators for future research.  Ideally, the goal will be to effortlessly link educators, biologists, engineers, food nutritionists, etc. to one another.

The other topics in the panel asked the audience to reconsider assumptions they make when designing research programs for international studies. There is this perception that a country is either developed or not, but in reality, developing countries are on a sliding scale.  As Charles Steinfeld explained, while many people across Africa have access to cell phones, that does not mean they can use them.  Limitations such as power accessibility and prepaid phone cards restrict use.  Moreover, the general culture still sees cell phones as a social device not necessarily to be used outside of conversation.  Using phones for watching educational videos and receiving texts about the weather conditions are not yet a good option for mass scale information dissemination.

Other topics included examining our own implicit bias.  First and foremost, asking yourself if the research is relevant to that particular community, and not your own interests.  Does it have a practical impact?  What unintended consequences might occur simply because of lack of cultural understanding? Respect that interaction with another group should always have a foundation in bidirectional learning.  Until I visit another country, I’m not sure I will know what implicit bias or assumptions I have.  In fact, the mere idea of what is respectful and what is not is an assumption I am currently making.  I don’t know if I can really grasp what behavior I need to modify or practice until I expose myself to that new environment.

And I think we can extrapolate the same idea to training students in biology. As this symposium highlighted, there are a wide array of career options for biologists.  How can we prepare ourselves for future careers if the only option we know about and are trained in is the academic setting?  As Alex Corrion put it, “Very few of us go into academic careers, but we are being trained only for those careers by faculty who have only experienced that career path.”

I’m not saying everyone should leave academe to go into politics or industry, but I am saying that biology training needs exposure to other fields.  People interested in politics and public engagement should be encouraged to explore those options by the faculty training them.  In a world where we have unlimited access to information at our fingertips, why aren’t we getting this information to developing undergraduates?

Joseph Byrum’s arrival followed the symposium, with his visit the following week, and directly supported much of the information described by Sheril and Ailing.  He explained that employees from biology are not as competitive at Syngenta as other STEM fields.  He suggested students work on quantitative and writing skills, specifically focusing on developing a strong statistical background.  He also suggested that students use resources at the university business office to practice on the behavior component of applying for a job in industry.  Specifically, the questions asked during a graduate or postdoctoral interview are strikingly different from those in industry, which align with business formats.  Finally, he also recommended that all universities require Capstone courses for students in biology to encourage interaction and exposure to multiple lines of work.

In short, it is increasingly unlikely that researchers will become faculty at a research university.  Vitae responds to Nature’s #ResearchRealities promotion by quoting a 3% chance of a postdoc ever becoming faculty.  With these odds, it is vital that we pass on this information – desirable skill sets for industry, fellowship opportunities in public engagement, and resources available for working in developing countries – to those following in our footsteps.

Plight of the Young Scientist: http://www.nature.com/news/the-plight-of-young-scientists-1.20870