Excerpt: “Although the Council recognised that there were already a number of important initiatives that were promoting rigour and integrity within the research community, it suspected that aspects of the culture in which research is funded, practised and communicated may be undermining efforts to raise the conduct of science to the highest ethical standards.” 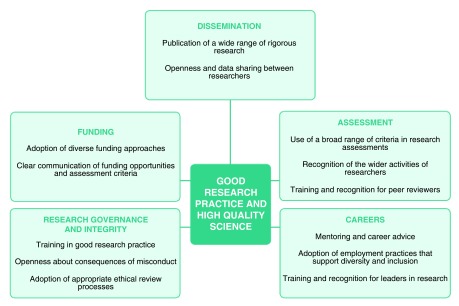 In 2014, the UK-based Nuffield Council on Bioethics carried out a series of engagement activities, including an online survey to which 970 people responded, and 15 discussion events at universities around the UK to explore the culture of research in the UK and its effect on ethical conduct in science and the quality of research. The findings of the project were published in December 2014 and the main points are summarised here. We found that scientists are motivated in their work to find out more about the world and to benefit society, and that they believe collaboration, multidisciplinarity, openness and creativity are important for the production of high quality science. However, in some cases, our findings suggest, the culture of research in higher education institutions does not support or encourage these goals or activities. For example, high levels of competition and perceptions about how scientists are assessed for jobs and funding are reportedly contributing to a loss of creativity in science, less collaboration and poor research practices. The project led to suggestions for action for funding bodies, research institutions, publishers and editors, professional bodies and individual researchers.